Phew. Today was going to be a short day. This just what I needed after all those hills. I knew I could take it easy. But then again, anything would seem easy after yesterday.

This is one of the great things that one you push yourself, and you manage to do it, what once seemed like an effort, seems like an absolute breeze.

Waking up, I remembered Leeroy Brown. He was already bustling around camp when I woke but he seemed a lot more sober than he did the night before. The radio was back on again though. I was certainly in a better mood than I was last night and more prepared for morning chats. Saying that there wasn’t much beyond “good morning”.

Jace on the other hand seemed to be in a slightly different mood. It had been a relatively cold and damp night. The fog had been hanging in the air, drizzling all night. Jace had one of those really old school tents. The ones that you think of when you try to draw an old scouting tent. It had 2 poles which you stand vertically at both ends of the tent. One end goes in the ground and the other sits in a ring at the top. You stretch out the tent and peg it down, making that famous ‘A’ shape. The only thing is, this tent in particular and style means it isn’t very stable. Costing $30 from Walmart probably didn’t help either.

Jace crawled out of his tent which was now just looked like a bivvy. His face was an absolute picture. It had collapsed in the night and with that, the rain had got in, making everything wet. The sleeping bag was literally dripping. He was cold, wet and didn’t have any sleep. Now, this is probably how I looked when I got the puncture. He was grumpy to a comic degree, muttering things to himself as he tried to pack away his collapsed wet tent. I really did try to stop myself from smiling, but it was hard not to laugh. The night and day before really didn’t help his mood neither. I wrote in my journal “This will be an important lesson” for the young fellow, in terms of planning with good equipment (not a $30 tent and sleeping bag) but also it’s character building.

With this, Jace had decided to ride to Fort Bragg early and find a Laundromat to dry out his clothes and sleeping bag. I do wonder what it smelt like as well. He as recently as yesterday (8/11/16) admitted that he may have peed in it as well.

Anyway, I was fully expecting to see Jace again on the ride so I wasn’t too worried that I wasn’t going to see him again. I stop off in Fort Bragg to visit Safeway and stock up on some essentials but once that was done I was on my way again.

My first stop of the day was Mendocino. My first introduction of Mendocino was from This is Spinal Tap – apparently some great weed, however when I got there it was far from what I’d expect from a weed growing town – which is probably a good thing. It sits just off the 1 (sorry, I forgot to say in yesterday’s post, at Leggett we left the 101 behind, to replace it with the 1. Highway 1 would take us all the way over the Golden Gate Bridge), and it reminded me a bit of Trinidad from a couple of days ago, but it was far cuter. There were beautiful little boutique hotels, old BnB’s and once in town some great little coffee shops.

I parked my bike and hit up Moody’s Organic Coffee Bar. It turns out Philipp (from Rainforest Hostel, WA) had spent a whole day here. I felt nice knowing that we had crossed paths again, although at different times. I was content at spending some time here. I had a coffee and a muffin. I managed to catch-up on some internet time (thank goodness for free Wifi), sit back and relax. They were playing rock music as well so it was literally music to my ears. I hadn’t heard a guitar solo in weeks! I managed to get some writing done which I didn’t do last night because I was just too shattered. I felt like I could stay here for ever.

I find out that Mendocino is a nice little holiday town for Californians, so there were quite a few tourists about. I was the only cyclist there however. After making my coffee last as long as I possibly could, I get myself back on the bike to find somewhere different to have lunch. Around the corner I find a cute little pizza place called Frankies, which would have all the calories that I would need to finish me off. Yum. Again I take my time, eat my pizza and drink my root beer. For desert I treat myself to some gelato and then I am really on my way.

I didn’t really want to leave. This was the type of place that I COULD spend time in (I laboured this point a lot . . . I know). It was big enough to keep me fed and entertained but small enough to not be overwhelmed by lights, noise and people. Alas, I decided to push on, and after wiping the last bits of ice cream from my lips I was saddled and ready.

I created a new song on my way out:

And so on. I think you get the picture. It was far more pleasant than the one on Vancouver Island!

It was a shame to leave however I was in high spirits. I really felt as if I got my cycling Mojo back. I had pulled through the previous days of uninspired riding, persevered through a challenging big day and now I felt top of the world. Nothing was going to get me down again, and I really needed yesterday to show that. Like Jace, I certainly learnt something!

To add to this, I was back on the coast line which always makes me happy. Although I’ve only been here a short time, I’m really liking Mendocino County. So much so that it’s the only county of the whole trip that I committed to memory (I mean Curry county doesn’t count – that’s too easy). This hills were rolling and there was switchback after switchback. Sometimes it felt like you weren’t going anywhere, just back and forth but the surrounding area was just so beautiful, I didn’t care. I was riding with a grin on my face again.

Rolling into Manchester I have two options. I could stop off at the KOA, or go another 1k down to the state park. The only difference is going to be in cost. I knew that Scott and Andy were going to be at the KOA because of the facilities. Jace on the other hand was going to be at Manchester (he’s a poor student). I decide to head to the State Park. I have a little cycle around and it’s empty. I found the board with a map but I couldn’t see the Hiker Biker area. I nearly turned back when I heard “SCOTT!”. It was Jace.

His tent was already up and he looked pretty settled. He was the only person there. I pulled up and I was happy to see him. I pitched up next to him and we caught up. It turns out his day continued to get worse. His gears had stopped working so all those hills were just impossible for him to get through. But he managed to hitch a ride. His bike was upside down as he’d been tinkering with the gears. After a while it seemed to be working well enough for us to head to the beach.

We just had fun at the beach. It took us 20 minutes to find a path down but we were back on the ice baths again and drawing dicks in the sand. #Boys 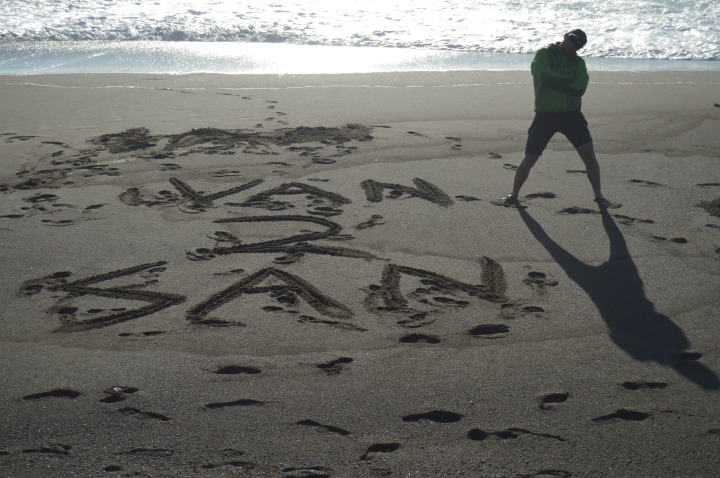