Waking up pretty bleary eyed, we grab a taxi into town for some early morning breakfast. The rain hadn’t stopped all night. We managed to find one place that opened at 6 am which was a blessing as we didn’t have any food with us at the house. We scoffed our breakfast but we were cutting it a bit fine. The shuttle was scheduled to leave at 06:45. It was 06:43 by the time we left the breakfast place. Still chewing on our last mouthfuls we made a dash for it.

Luckily, we weren’t the last people on the bus and they were expecting us so they would have waited anyway. The bus is pretty full with fellow hikers. A nice mix of ages and experience. I can’t say that the collective enthusiasm was too high at this point. It was chilly, wet and early. So it was understandable. We had checked the weather before we left the house and it gave us hope. It should start to clear up by mid-morning. We clung onto that with hope.

The ride was about 2 and a half hours, getting into Gordon River around 9:30. We sit down and have our briefing by the trail staff. They went through all the details from safety on the trail to where our fees were being spent.  We are given our maps which detail the high and low tides for each day that we will be on the trail. This is important as part of the trail is beach only, which is only passable at low tide. They talked about the wildlife, where we could camp (anywhere apart from First Nation Reserves and ‘Do Not Camp’ areas), the ladders, the ferries, the cable cars – the full shabang. It was quite a serious talk and they certaily built it up to be a big challenge, having to assume that we are all beginners. Also I am sure they need to cover their ass too

Talk over, the rain had ceased and all we had to do was wait for the ferry to take us over to the starting point.

The ferry that we took felt like a WWII flat bottomed landing craft. As we got to the other side, the ramp was dropped for us to talk onto landing area. So here we were – 3 guys – The beginning of the adventure:

Sean a 19 year old local from Sechelt, BC. Upbringing in the outdoors and hiked the length of NZ

Flo, a 30-something German, numerous mountain climbing and hiking events including Kilimanjaro and the length of NZ

So an adventure for me, maybe more pedestrian for my counterparts! This is important for many reasons that will be clear in the coming days.

Our first task is to get up the longest and only vertical ladder of the whole trail. It is pretty knackering actually, especially when you have a pack on your back. There was a bit of a back log of people so we had to wait around for a bit. We all got up in good time however and marched on.

On the bus we were talking with the other hikers and chatting about how long we were going to take to do the trail. We were doing it in 3 nights, the others were doing it in maybe 5-7. They were surprised and gave us a hopeful and supportive ‘good luck’, especially when they sawthat  my face was full of confidence. . . .

So at the top of the ladder, Flo and Sean had managed to squeeze ahead of the groups we met on the shuttle. I was happy to not over take. I mean the trail was pretty narrow and they weren’t that slow. Soon enough Flo and Sean were out of sight and the same people who wished me luck were saying “So they’ve left you behind already” in sympathy. Could they tell I was a newbie? Was it written on my face? Evidence suggests so.

They kindly let me by and I potter on to catch-up. I felt a little bit like Samwise Gamgee compared to Aragon and Legolas that were Flo and Sean; with their long legs, swiftness and worldy experience. We continue together and soon enough we are by ourselves. We didn’t see the group again.

We started seeing others coming in the opposite direction. They were near the end. We looked fresh and wondrous, whereas, no offence, they looked pretty rough. It reminds me of the scene in the “Bastogn” episode of Band of Brothers, where Easy Company were walking into the Battle of the Bulge, and their colleagues who had just been there were leaving for safety. They had experienced some heavy rain for a couple of days and were clearly happy to be near the end. They gave the same “good luck” to us as the others on the shuttle. I mean, why so much luck, how bad could it really be? 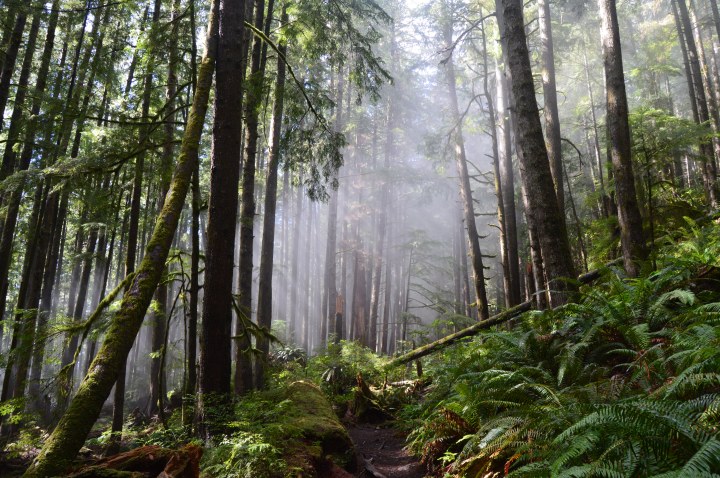 Anyway, Flo and Sean continued at their pace. Admittedly, they said they got carried away with reminiscing their time on the trail. This was the first time they had seen each since. With this I was lagging behind again. After stopping to wait for me Flo recommended that I go up front to set the pace. This was good because I was then less grumpy and now part of the Fellowship.

So the Southern part of the trail was incredibly beautiful. The roots were deep. With the rain this mean the mud and ‘puddles’ were deep. No going around these babies. The moss was fresh and revitalised. I felt like a kid again with all this mud. The bare rocks were pretty slippery so we had to be careful on these. Of course so was the mud so on some of the steep parts . . . we needed to treat with an air caution on these too. No one fell of course…

I had my poles with me. Now these took me a while to get used to. Where do I place them? They kept getting stuck between roots or in the mud that I sometimes left them behind. In the end I got into a good rhythm however they never didn’t get stuck.

We reach camp one at Thrasher Cover (Kilometre 70*) in very good time. The trail staff had recommended us to stay there for the first night. It was only 5k but they warned us that it would be a very slow 5k. When we got there in about an hour and a half we ere slightly miffed by this. It was this that I really realised that they were overstating the difficulty of the trail. We pushed on to camp two in Camper Bay (Kilometre 62*). It was here that I thought we would be staying for the night. It was around 5pm and I was more than ready to drop my bag. Just before we got to camp we met some hikers. The usual chat revolved around ‘where are you heading today?’.

I snorted and said to the other hikers as they past “yeah, we’re actually probably going to Kilomter 62”

I was wrong. Without any real consultation we waved goodbye to Camper Bay and pushed through to  Cullite Cove. In hindsight it all made sense, and maybe it was down to a lack of experience on my part, and thereofre my expectations were different, meaning I felt that I was certainly being pushed hard for this site.

*The map dertails Gordon River as the end, so the Kilometre markings count down

We arrive in Cullite Cove at around 7pm. The sun is pretty much down and the camp is close to being full. This didn’t quite fill me with joy, but exhausted as I was, I was just happy to stop walking with the promise land of sleep close by. As it was getting dark we didn’t really have time to chat to any of the other hikers so it was food and bed.

Camp was on the beach, just above high tide. It looked a little like base camp from any mountain climb. Multiple tents and all the camping gear you can imagine. It was a well placed because it was also on the creek so you could top up with water for all your drinking and cooking needs.

In bed I had plenty to think about. Based on today’s hike only, I knew that it was going to be a tough few days. Not totally because of the trail. I was left feeling that something terrible was going to be just around the corner, but never arriving to it. I think this is because we met people on the way who warned us about X, Y and Z, however their experience and frame of mind may be completely different to ours. So you had to learn to take it with a pinch of salt.

I had to re-adjust my thinking. Having learnt from my bike ride, I wanted to be able to enjoy and take in my surroundings. There were things I missed on the ride because I was too focused on pushing myself, as well as the end, rather than the journey. I wanted to take these learnings into this trip. At this point, I feared that I wouldn’t be able to. My hiking experience (bag packing) and fitness would hinder my ability to take in the surroundings, as I my main focus would be to complete the day’s hike.

I had 1/2 come to terms with this that night. I didn’t like it but it was what it was.