This was my first boys trip I’ve had in probably over a year. It was with a group that I’d never hiked with before, a mix of friends, and friends of friends.

Going on these types of trips with a group that you don’t know very well can have it’s problems. Group Dynamics always comes up in articles I read about trips – whether good or bad, and I was hoping that this one was going to make it a good trip. It worked out a treat

An early start is something I appreciate and an early start we got on this trip. I got picked up by Paolo at around 645, before heading over to East Van to pick up Daire and Chris. Richard was in the other car picking up Ethan, Kev and Phil, the group organiser (Although we were a lads trip, we were part of a larger group that had booked the whole cabin out, organised by StemCell). Whilst leaving Vancouver, the messages were going back and forth on the group chat about our intended arrival time, and who brought what beer.

Phil had arrived from Whitehorse late the night before. No packing and no sleep meant no Phil. I can agree that this hike may not have been the easiest thing to do after getting in so late, and probaby would have done the same. None the less, we were disappointed… but only a little bit 😉

We made it to the trail head in pretty good time. We bonded over putting chains on the car, a requirement to reach the 2nd car park, patting ourselves on the back and agreeing how the experience from the last 5 minutes (20) made our facial hair grow a little quicker and thicker.

The other car was already parked, with the team waiting for us, so we swiftly got ready and going. We checked in with one of the StemCell crew with “yeah, we’re Phil’s mates”, and we were off.

The first quarter was a bit of a slog. I always find the beginning of hikes a pain. It takes me a while to warm up and get used to it, plus the beginning is usually over old logging roads and in the forest with little to look at. But it was OK, we were in a large group and chatter kept us going.

Soon enough the group split into 2. Chris and I hung back whilst the others marched on. I was blowing a bit as I’d not done too many hikes this winter, and Chris has reoccuring back issues which made carrying an over night bag pretty uncomfortable. For the first half, the groups would come back together again and split off, with different people in the group each time. So everyone got to go a little slower but also ramp it up if they wanted. This part of the group dynamics was great. There were no egos, no macho attitudes, just considerate to the group.

One thing that I’d like to point out is that after a couple of kilometers, after we got out of the forest, there was on incredible sound. The sound of 100’s of birds chattering. What was strange was that it came from the branches of one tree. All the other trees looked care of life. It was mesmorising as I’ve never seen anything like it before. 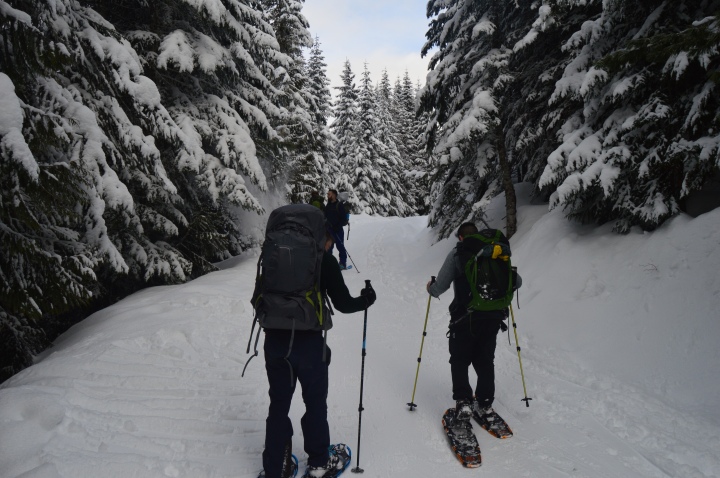 We made it to the Red Heather Shelter at just under the half way mark just in time fo lunch. We monopolised one of the big tables inside and all tucked in. It was pretty chilly inside and our wet backs got cold pretty quickly, so as much as we’d like to eat and enjoy the rest, we knew that walking again would be better for our future colds!

So after a 30 minute break, we were back on track. The trail was super easy to follow. Now we were out in the open, there were no tree markers to follow however Park Rangers had placed bright orange poles, the ones you usually see at ski resorts to mark boundaries, as the signal the route. The rest of the snowshoe was up and down along the ridgelines all the way to the hut. I made some good use of the heel lifts so save my calf muscles a bit.

I was excited for this trip for a few reasons. One was the views. Maelys had been a coupe of summers before, but I couldn’t go as I’d injured my knee. Having seen some of her photos I knew what to expect and I couldn’t wait. I was a little disappointed. The weather was rather drab; grey skies and cloud covered mountains. Anything could be out there and we wouldn’t know. I kept my fingers crossed for the return trip.

We arrived at the hut in good time. We had a few hours of daylight ahead of us, so there was plenty of time to do some more exploring if you wanted. First things first was to select the bunk. Going upstairs in the hut, all the bunks are against the wall. Along the bottom there’s enough space for 2, and then one person can fit up top. When I say 1 person, I really mean it. My Thermarest just about fits in the space length wise with maybe an inch spare either side. It was cosy. The cot was about 1 inch deep as well. With this hut having an arched roof, there was plenty opportunity to roll out either side of the bunk.

Bedding sorted, and with plenty more energy, I went for a walk for about 30 minutes. I broke trail the whole in deep snow. This was the first time I had tail extensions on my snowshoes and they really helped dispurse the weight. As the weather was crappy, there wasn’t too much to see to keep me out so I decided to come back. 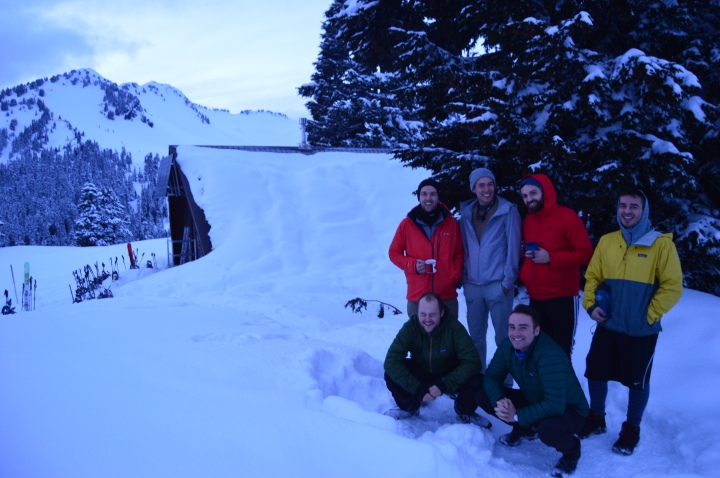 After a perfect little nap, I spent a couple hours outside taking photos of the hut and sky. Outside it was quiet and the air was crisp. I had to pop back into the cabin a few time and when I did, I felt like I was entering a secret bar in LOTR’s or something, with the atmosphere and the hustle & bustle.

All the benches were occupied by different groups. People were up and about cooking, melting snow for water and others chatting and playing cards. With the darkness outside, snow as deep as the upper floor, and the glow of the fire and solar lights on the inside, it was super cosy. It’s also like a tardis, from the outside, the half buried hut looks like it would house less than half of the group we had there, but once in it opens up and there’s space for everyone!

This was the first time I dedicated any amount of serious time towards taking photos at night. I usually got too cold or impatient but tonight I was ready. I played around with my aperture and shutter speed and I have to admit, took some photos which i was both proud and surprised about! 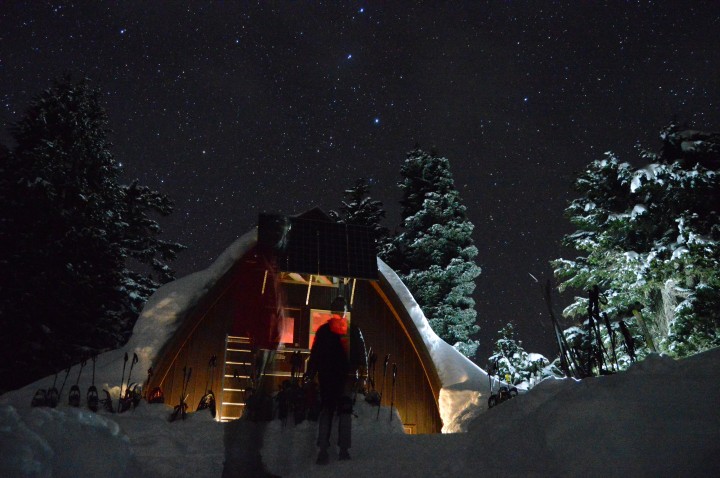 My batteries on their last legs and I had exhausted how many shots of the cabin I could take so I head inside to make some dinner. After eating and writing up my notes from the trip and sketching, I spent the evening with the rest of the guys, playing Shit Head and having laughs. I only wore the shithead hat a couple times.

After a decent nights sleep where snoring was at a minimum and I only had someones feet (Richard) land on my face once from the bed behind me, I was back out taking more photos. It was before the sun had peaked his head over the mountains. Yes, mountains. The skies were clear and could see for miles. This is what it was all about! I finally had the views that we were looking for. Whilst others were getting breakfast and waking up, Richard and I went for some walks around the hut to take some pictures of the surrounding area and get some nicer day-time images of the hut.

This pretty much summed up the rest of the hike back. I was very much last the whole way as I couldn’t stop taking photos. I’m one usually to live in the now, when it comes to photos, but it had been such a long time and it was so beautiful, I couldnt’ help it. Plus I had a very willing model (I use that word loosely) in Richard who was happy to fill out his “Winter Playbook” haha.

Daire got back to the car an hour ahead of the last group (me). He was training for a half marathon so he was happy to march on and get the exercise in. Back at the cars faces were full of smiles, after what had been a great weekend. As mentioned at the beginning, the group dynamic worked well. People didn’t get left behind, there were no egos and it was just an easy going group of people. We finished off the trip by heading into Squamish for a well deserved dinner at Howe Sound Brewing.

(Side note. On the trip down, we had a near miss on the logging road. Some of the bends are narrow, and we were going a safe enough speed, but at car coming from the opposite direction wasn’t and forced us to hit the brakes. We skid a bit and probably much further away from the edge than we felt but still, that put the jeepers into us a little bit. 5 minutes later we saw that some of the snow bank was missing at the edge of the road. The other side of that is a nice drop down! We concluded that it lust have been another car tha had a near miss. It wasn’t only until we got to the pub that we found out that it was Richards car that had a near miss. Going round the corner he felt his wheels go under him, and fish tailed a little. It was the back tires that had knocked all that snow off before regaining control and making his way safely down. Scary momnts for them, but brough back memories of our accident the year before). 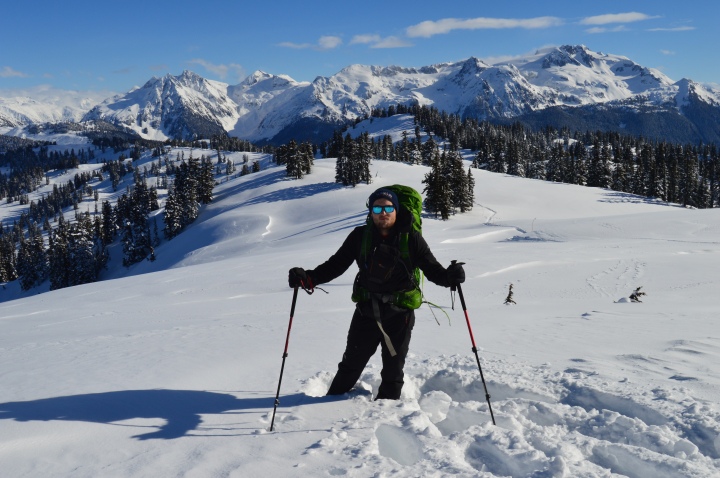 Overall, a great trip with great people. I’m going back with Maelys in early Summer so we can finally explore the trail together. I really wish she had been there with me to see Elfin in Winter. Next season!