“I can’t wait for some tea! It’s going to be awesome. Scones, crumpets, jam”

I forgot we weren’t in England and so the teahouse may be different to what we would get at home.

Even though the weather was a bit grim, the car park was busy . We made our way from the through the trees and there she was, Lake Louise. Named after the 4th daughter of Queen Victoria, Princess Louise Caroline Alberta (The same Alberta as the Province), it’s a beautifully milky lake with a tinge of turquoise. The colour comes from all the silt that is deposited down from the glacier.

As a major destination in the Rockies, I had heard a lot about Lake Louise before coming here and I have to admit the beauty at first sight lived up to expectation. It remains beautiful as long as you keep your back to the hotel which with, large volume of tourists (of which I was one) takes away that natural beauty of the place. This is even more true in context of some some of the other places we have been where you may see one or two groups of people in an afternoon.

We head off in search for the first of 2 tea houses that we were planning on reaching today. We navigated around the right side of the lake taking the trail that took us away from the lakes edge. This was a wise decision as we left the tourist behind who only wanted a quick snap of the lake. After about 15 minutes it was pretty quiet. This route was quite damp and full of switchbacks and we managed to climb quick enough and get our sweat on. There were a couple of viewpoints where there was a clearing in the trees that created a little traffic jam but it was worth the stop as it gave you a more natural view of the lake without the hotel in it.

Although there were fewer tourists up here there were other hikers. We’d maybe come across a set of hikers every 5-10 minutes. And if you didn’t see them, you could certainly here them with their bear-bells dangling off their bags. This is a busy trail by backpacking standards for sure but far more relaxing than the hive of activity around the hotel

After maybe an hour, hour and half we got to a waterfall. This waterfall drained the water from Agnes lake down into Lake Louise. This was a good sign as it meant shortly we would be at the first tea house. The sound, sight and smell coming from this waterfall was just lush and I could have sat there for hours just watching it. Alas we didn’t have hours but Loz got involved and enjoyed the waterfall as much as I.

Just around the corner was the Tea House at Lake Agnes. For some reason I had an English Tea House in my head – a bit like Osborne House (Isle of White). This was completely unfounded and highlights my research skills, but I always conjure up images of high tea when in reference to a tea house. So you can imagine my delight when we came across the wood cabin. It was pretty chilly up here and as it started to rain pretty well, unsurprisingly the tea house got a little busier. The windows had condensation clinging onto them and the light inside was flickering. After queuing up for about 20 minutes we realise we were in the ‘take-out’ line. We squeezed our way through the customers sitting outside trying to keep dry under the canopy and got ourselves inside.

The fire was roaring, the candles lit up the room and it was so cosy and warm. It’s exactly what we needed at this moment in time. We managed to keep out of the servers way for another 15 minutes until a table came free. We jumped on it with precision.

I ordered soup which came with a nice warm bread, and we had coffee and teas plus a sweet for desert. Talking with the staff, there is no electricity in this house so they can’t store food for that long. It’s all hauled up by staff in backpacks on a regular basis. All the food is cooked on a wood stove, the smell and warmth of which really added to the cosiness of the whole place.

Soon enough we had to leave and go back in the rain. I couldn’t make the coffee last any longer. Our next destination was Lefroy Glacier. To get there we jump onto the Plain of Six Glaciers trail, one of a few others of the requiring a little back tracking past the waterfall that seeps out of Agnes Lake. We give up all the elevation we had climbed in the morning and head downhill until we get to the old glacial bed. You can tell where the glacier had once been – it had cut through the mountain side and left bare rock in its’ wake. What’s amazing about this type of area is that one minute you’re hiking through a lush wet forest, clambering over roots, to then be on a bare rock trail making your way up to a glacier.

This part was harder on your ankles and thighs, trying not to slip on any loose gravel and stones. Plus it was a pretty decent climb. We made friends with a little chipmunk who was just as friendly as any squirrel in Hyde Park. Leaving him behind we found it difficult to see where the glacier was going to be. We could see that the glacial path turned around the corner to the left, but it didn’t look like we’d be able to hike far enough to see it. Low and behold, there it was. What an absolutely gorgeous sight. both of us felt very lucky to have seen a glacier like this. You could tell that it had been receding and who knows if it will be there for the next generation to experience. 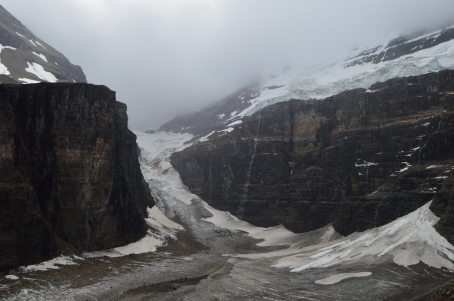 As is always the case, we soon started to get a bit cold having stopped for a while. With the pictures taken and a brief chat with other hikers we start to make our way back. There was also the second  of the tea houses to look forward to plus a well deserved rest-room break. ahh. Going down was just as difficult as going up, being careful enough not to slip on the gravel. We met an American guy making his way up. From talking to him for a short while this gent, from NY State, was making his first trip to the proper outdoors. He seemed to be struggling a little with it and asked us how much further it was to the glacier. “Maybe another 40 minute walk” we came back with – “seriously – it’s worth it!”. He carried on.

Back at the second Plain of Six Glaciers Tea House, we get a seat straight away. It had stopped raining by this point and so it wasn’t being used as a refuge from the weather. I had another coffee and banana bread – or something to that effect. We even decided to sit outside which was a great choice. We needed to add another layer, but the air was fresh. With a nip in the air and a sense that we should probably get back we start to make our way back

Instead of following our steps back up to Lake Agnes we went lakeside instead. With the lake on our right and up close the milky colour was even more prevalent. Although this was the busier route I have to admit it was nice to be so close to the water. We managed to get two different perspectives of the lake and so it was certainly worth it.

Being flat, we made ground a lot quicker than on the way out and soon enough we were back at the beginning. I have to admit I had mixed feelings about this hike. I really didn’t like the Fairmount Hotel and how commercial the lake was. I have seen many lakes on this trip and others and there are certainly more beautiful ones (You can read my post on the Emerald Lake Trail) out there. However once you leave that behind, the hike is challenging enough to get up a sweat but overall it’s pretty easy. You are always going to be humbled by sights of the glacier and mountains. They are so large that you can see them from such a long distance yet it takes you a deceptively long time to get there!  You get some great views and it’s a lot quieter – plus the Tea Houses are extremely cosy and perfect for a day of crappy weather!

N.B. Loz and I hiked the Lake Agnes and Plain of Six Glaciers trails. There are many more Lake Louise hikes to be done in the area.