In the morning I filtered my water and had my standard breakfast of oats, trail mix and water. Yum. After we were packed we were back on the trail again at around 8am.

As we did this I aired my grievances about the previous day. I didn’t need a response, I wasn’t looking for help, it was more to get it off my chest, to explain why I was grumpy. He tried to offer condolences and make me feel better by explaining the reason why however this didn’t quite help. I knew what the deal was – My bag was too heavy and my experience too little for the speed and distance we had to cover in time that we had (we could only book 3 days). As I say, I just wanted to share.

We did get to experience the first cable car. I found it difficult to imagine when the trail staff were explaining how to use them so I was excited when I got to see the first one. Myself and Flo jumped in with our gear and we zoomed across the river. This was fun – and I’m glad that we had a good few more to go in the trip.

The first 10 minutes on the other side didn’t really get off to a good start. I was walking on a thin branch to evade the water, slipped and landed on my knees and elbows. I managed to prevent my full face from going in which is difficult with a top heavy bag. Tired and grumpy already this morning, I was seething at myself. It was one of those moments where I just felt very stupid. I somehow managed to take a deep breath and keep it all inside. Flo and Sean both said they were expecting an explosion and they themselves would have been effing and blinding. I think they were just trying to make me feel better.

It happened a few minutes later in a deeper set of water. Oh man. If I could seen my face  I think I find it difficult to keep a straight face. Again I managed to keep from swearing, but mumbled something inaudible to myself. Another deep breath I tried to calm myself down. I can imagine Sean and Flo looking at each other with ‘uh oh’ written all over their face 🙂 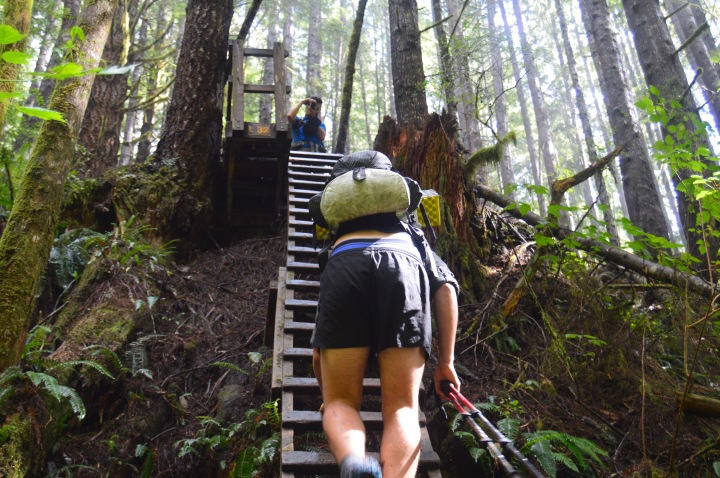 Anyway we continued in haste. I was quite and Legolas and Aragon discussed NZ. We had multiple ladders this morning. I realise I hate ladders. Ladders suck. It looks like some of these ladders have been here a good while. The trail staff did say that if it looked less than a year old – don’t trust it – go safe. Sound words.  You could see on the ladder steps where the feet had been as there were 2 dips where it had been worn down so much. All of the ladders were slippery. They had enough time to soak up the wet and the older ones were even soft to rotten.

About half way, whilst on a beach section Sean offered to swap packs so that we could make up some ground. The timing couldn’t have been better as the sand was pretty soft and difficult to walk on. There was a part of me that thought “no way, I packed this, so I shall carry it” however there was another part that thought “we’ve got to do what we’ve got to do to all get to camp in time”. The latter was a bigger part. So we swapped packs for the rest of the day. His pack was lighter than my backpack I would take to play squash! I felt like I was flying. My mood was lifted.

For lunch we stopped off at Chez Monique for burgers. This was a little shack made from wood and tarp located just south of Carmanah Lighthouse (44k mark).  They were $20 each which is pretty steep but when you are in the middle of nowhere you have no other options really. Flo said that he felt he was cheating a little bit seeing as we only started the trail yesterday, however I did not mind at all. I was already DONE with my tuna wraps. Feeling like a hobbit who had over packed his food, this was a perfect opportunity for me to leave some food in a ‘food bin’. You were allowed to leave any unwanted food for travellers who may have under-packed.

I could have probably stayed here. The sun was out, the socks were off and I was just happy and relaxing. If we had more time along the whole trail I certainly would have stopped off for a bit longer. After we left we did see something spectacular. We saw a lone Orca swimming in the same direction as us. It was an incredible spot by Sean. (S)he even gave us a blow from his hole. Amazing

Where there wasn’t a cable car or bridge, the creeks and rivers would need to be tackled on foot. I  had a different approach to the other two. For me, who had walking boots plus a pair of trail runners for the wet, opted to change footwear before each creek / river. Leather hiking boots take a notoriously long amount of time to dry and I didn’t really fancy wet feet for the rest of the trip – especially when I had an alternative. The others just trudged on through in their trail runners. Heroes.

We get to where we planned for camp at the Cheewah River. As it’s not a designated camping area it was quite difficult to find where we could pitch up. We had just walked through a First Nations Reserve plus we were on a stretch of “Active Wildlfe”, which was supported by “No Camping” signs. Monique from the Burger place suggested we could stay here as long as we find a spring. You could camp there. It took a while to find. But Sean found it.

I’m a bit of a square. I don’t really like breaking rules. Especially rules in a topic area that I’m more ignorant than informed on. Like with teachers right – you know what you can get away with those you know well but your new French teacher however is an unknown quanitity. So I want to be on my best behaviour – so camping here wasn’t sitting right with me at this point. However, after discussions with Flo, and looking at the map for reference, the North side of the bridge, where the spring was found, was neither in the Active Wildlife area NOR reserve so we were fine so we were OK. I explained to guys the reasons for my reservations was based on the rules rather than wild camping. I wanted to save face as in my tiredness I felt a bit silly.

Although we were on the river we couldn’t drink it. This was because it was a tidal river. This is why Monique had told us about the spring. This spring wasn’t on the map and so we were well and truly going on the word of someone else. It wasn’t the most appetising of springs to look at. It was brown and a bit murky, however you could see the movement in the water so we knew it was a sitting puddle. Oh . . . and there was a sign.

We had dinner on the bridge – Seeing as Tuna was gone, I had my noodles.  The view was beautiful. Sitting on the bridge looking down the river with the fog coming in was a perfect way to end this day.

Soon after it was getting dark. With another full day ahead of us we went to bed early(ish). The last task of the day was to get all our smellies away from camp so we hung them on the bridge, out of harms way. And then . . . . Sleep.